The rhinoceros has few natural predators. Yet, as a result of active poaching, the African black rhinoceros (Diceros bicornis) and the African white rhinoceros (Ceratotherium simum) are nearing extinction.[1] South Africa is home to approximately 80% of the world’s rhinos and as a result, has been hardest hit. Recent poaching statistics released by the South African Department of Environmental Affairs indicated that the period 2007 to 2014 saw an increase of 9 000% in the number of rhinos killed for their horns, with more than half of these poaching incidents occurring in the Kruger National Park.[2] Despite the numbers slightly decreasing for the period 2015 to date, “two and a half rhinos are still killed every single day”.[3] 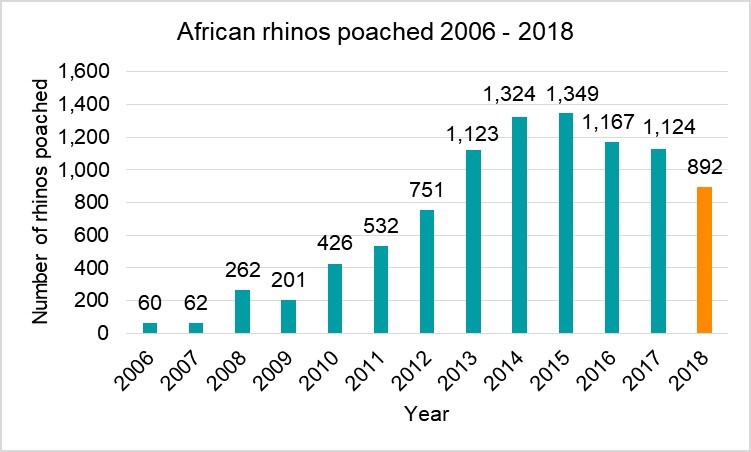 The driving force behind the illegal killing of rhinoceros is the relentless demand for rhino horn from Asia, where it is used for medical purposes. Asia’s demand cannot be met through legal channels as the Convention on International Trade in Endangered Species (CITES) of Wild Fauna and Flora[4] banned the international trade in rhino horn in 1977, when it became apparent that the high levels of poaching would ultimately lead to the extinction of the species.[5]

South Africa has undoubtedly made great strides in curbing poaching and protecting its rhino population. There are numerous public awareness campaigns focused on the cruel slaughter of these animals and the media often covers reports of arrested/convicted rhino poachers. However, no durable solution has yet been found.. Although, poachers are heavily fined and, in some instances, jailed, this happens only after the killing of another rhinoceros.

There are several challenges facing anti-poaching initiatives and in particular the development of devices that can monitor the behaviour of rhinos. For one, the vastness of their habitat hinders attempts to prevent rhino poaching.[6] Further, the anatomical structure of the rhinoceros renders ex vivo attached devices to monitor and study them difficult. The difficulty of establishing wireless communication with these devices and the impact of territorial combat on animal-attached devices further exacerbate the problem.

Finally, “little is known about the physiological, social and migratory behaviour of the rhinoceros.”[7] This impedes the development and optimisation of any monitoring system.

To address these challenges, and ultimately to facilitate nature conservation and anti-poaching initiatives, researchers at the Department of Electrical and Electronic Engineering, University of Stellenbosch are developing an animal-borne behaviour classification system. Preliminary tests have already been deployed, and the system tested on rhinoceros by attaching it to the hind legal of the animal.

The system’s biotelemetry tags can, in real-time, distinguish between classes of animal behaviour (such as standing, walking, grazing, running, and lying down) using statistical classification of tri-axial accelerometer measurements.[8] A prototype of the system was able to transmit live behavioural updates approximately every 6.5 seconds. The aim is to use these animal-borne classifiers in rhino conservation applications. By monitoring rhino behaviour, the aim is to automatically detect a sudden, unexpected change in behaviour that may signal an imminent poaching attack, thereby providing an early warning that may save the animal.

A key challenge is the provision of sufficient power to keep the tracking system active long-term. It is not viable to tranquilise the rhino every time a battery change is required as this poses a significant risk to the animal and the staff as well as being expensive. To address this challenge, research is being conducted to develop energy-aware feature and model selection techniques for the onboard behaviour classification.[9]  Furthermore, using kinetic energy harvesting for energy self-sufficiency is being explored.

The harsh reality, however, remains: There is no single magic solution that can solve the poaching crisis. It will take the best tools we can design and continued funding to keep this beautiful species from extinction.

To find out more about this project contact Thomas Niesler trn@sun.ac.za or Riaan Wolhuter  wolhuter@sun.ac.za