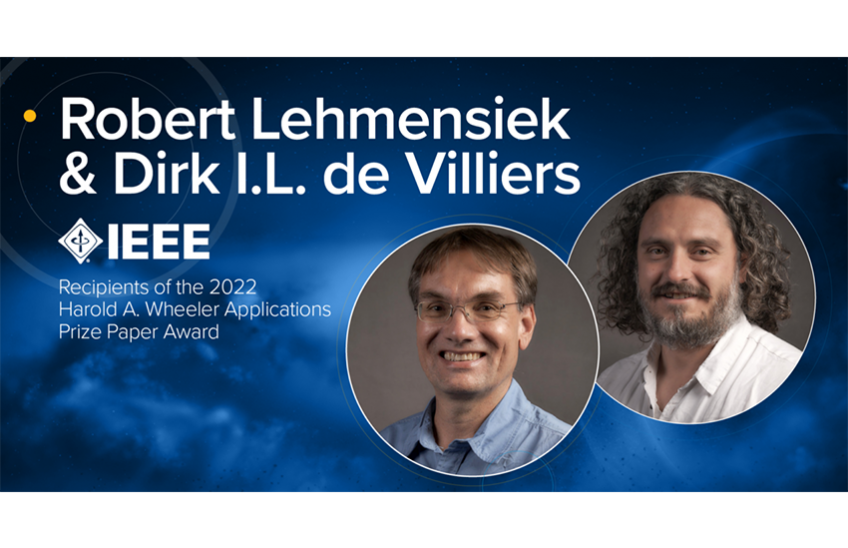 A team of engineers, including Professor Dirk de Villiers, testing the design efficiency of reflectors for the National Radio Astronomy Observatory’s upcoming next-generation Very Large Array (ngVLA) has received the Institute of Electrical and Electronics Engineers (IEEE) Harold A. Wheeler Applications Prize Paper Award for their research entitled, “An Optimal 18 m Shaped Offset Gregorian Reflector for the ngVLA Radio Telescope.” The next-generation VLA (ngVLA) is an interferometric array that improves by more than an order of magnitude the sensitivity and spatial resolution of the Jansky VLA and ALMA at the same wavelengths.

Professor De Villiers of the Department of Electrical & Electronic Engineering, Stellenbosch University has been regularly working with EMSS Antennas (Pty) Ltd., Stellenbosch, on the design of the reflector antenna systems for the MeerKAT, Square Kilometre Array SKA, and ngVLA telescopes.

The award-winning research presented the optics design and estimated the receiving sensitivity, of the 18-m shaped offset Gregorian reflector system proposed for use in the 244 antennas that will make up the main and long baseline arrays in the upcoming ngVLA. A parametric sweep determined feed horns with the goal of pattern symmetry and low spillover efficiency.

Given these feeds, a mapping function for the shaped offset Gregorian reflector system was then determined, by a full-factorial design, to achieve maximum receiving sensitivity with secondary parameters such as plate scale, scan loss, sidelobe, and cross-polarisation at acceptable levels. A sub-reflector extension is included in a feed-down tipping configuration with improved performance over the feed-up case.  Professor Dirk de Villiers explains:

“To be selected for the Harold A. Wheeler prize among so many high-quality papers is a great honour as this specifically highlights excellence in practical antenna design. Hopefully, this recognition by the broader antenna research and engineering community serves as further validation that the ngVLA will have a world-leading reflector system capable of doing all it was envisaged to do by the system designers.”

“Improving the sensitivity of one reflector by even one per cent equates roughly to having the collecting area of two extra dishes available in a 200-dish system. More collecting area means we capture more of the faint radiation from the Universe in our telescope, and this directly translates to being able to make images, and do other science, faster. Like having a camera with a larger aperture allows you to take photos with higher shutter speed in low light, having a more sensitive radio telescope allows us to detect fainter signals while observing for a shorter time.”