Beyond SKA1: The Dense Dipole Array

In our previous post, we discussed the history of the Square Kilometre Array (SKA) project which commenced during September 1993 and is being constructed in South Africa and Australia.  However, the complete vision for SKA encompasses a second phase that will see the SKA telescope become one of the most visionary science projects of the twenty-first century.

The SKA will ultimately use thousands of dishes and nearly a million low-frequency antennas that will allow astronomers to observe the sky in unparalleled detail and survey the entire sky much faster than any current system.

SKA2 aims for a significant increase in capabilities and to expand the project to other African countries ultimately seeing approximately 2 000 dishes distributed across Africa with an expanded frequency range of up to 25GHz.  It will build on the work of SKA1, namely, to pursue Science Driver in greater depth and to follow up on new discoveries emerging from the SKA1 programme. For SKA2, large, electronically steerable phased arrays or “aperture arrays” are being developed for the mid-frequency band (450 – 1450 MHz). The Mid-Frequency Aperture Array (MFAA) Consortium is tasked with developing these large systems and Stellenbosch University, as a member of the MFAA, is closely involved with the project.

Traditionally, reflector-based antennas have been the instrument of choice for radio-astronomy. However, recent advancements in low-power electronics and computing have made the use of aperture arrays a viable option for certain frequency bands. For SKA2, the MFAA consortium is currently evaluating several aperture array topologies of which the Dense Dipole Array (DDA), developed at Stellenbosch University’s Electrical and Electronic Department, is one. 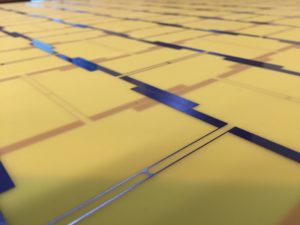 Dr Jacki Gillmore from Stellenbosch University developed the Dense Dipole Array (DDA) in collaboration with ASTRON and consists of densely packed printed dipole elements.  This dense arrangement is achieved by an overlap in neighbouring dipole elements, which results in strong capacitive coupling between elements that facilitates a marked improvement in bandwidth.

A prototype DDA tile of approximately 1 m2 has been manufactured by ASTRON and preliminary measurements have shown encouraging results.  A second prototype is currently under construction and will be used, among others, to conduct a study into the viability of a one-bit beamformer, which could hold significant cost and manufacturing advantages for the MFAA.

Looking ahead, SKA’s second-phase deployment will allow for significantly improved cosmological constraints. It will extend both instruments with a view to adding mid-frequency aperture arrays in Africa. This means that SKA2 will be able to commence operations and produce valuable science even before the completion of the construction.

If you want to read more about SKA, you might also enjoy these: