27 May 2020Posted by Electrical and Electronic EngineeringGeneral Newsbig bang, karoo, Radio Experiment for the Analysis of Cosmic Hydrogen

REACH is a joint venture between the University of Cambridge and Stellenbosch University in South Africa. With primary funding for hardware and logistics from the Kavli Foundation (through the Kavli Institute for Cosmology in Cambridge) and Stellenbosch University, REACH will be deployed in the Karoo region of South Africa, a unique Radio Frequency Interference (RFI) quiet site that is also home to the Square Kilometer Array telescope. The team has conceived the basics of the proposed system over a period of 2 years and is now in the next phase – construction and the ultimate deployment and operation over the period 2020-2021 (taking into account a probable delay due to the COVID-19 pandemic).

The Big Bang model is a theory mapping out the origin and evolution of the Universe and has, over time, become a well-studied field of research. It facilitated a better understanding of the subsequent theory of evolution, over billions of years, of stars and other celestial objects. However, less is known about the period spanning approximately 0.35 to 1 billion years after the assumed Big Bang. According to the theory, during this time, the Universe transitioned from “being a vast volume filled with a cooling neutral gas” to a realm of cosmic objects observable from Earth. 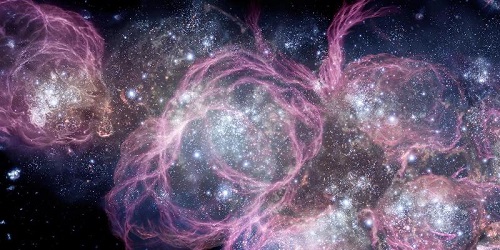 The theory that this experiment is attempting to prove is essentially the following: at the beginning of the universe after the assumed Big Bang there existed elemental particles which later led to the formation of protons and electrons. The first element that formed was hydrogen – since it is by far the simplest element consisting of only one proton and one electron that connects. The chances that hydrogen will form is, therefore, much higher than the chances of anything else forming. As the hydrogen formation increased, the hydrogen atoms were drawn together as a result of gravity (a natural force for which we have no explanation yet). Consequently, the hydrogen lumped together and started to burn which resulted in stars being birthed and eventually, galaxies being formed. This is the so-called Cosmic Dawn. As the stars burn, it ionizes a substantial amount of hydrogen around it, because of these high temperatures, and there is less hydrogen available (the so-called Epoch of Re-ionization).

Neutral hydrogen has a wavelength of 21 cm. This means that, every now and then, a neutral hydrogen atom transmits a signal at precisely 1.42 GHz. This frequency will change from 1.42 GHz as the universe expands because of the Doppler effect (that is, a visible change in frequency as the source or observer move). Since this experiment is concerned with what happened to hydrogen very long ago, the frequencies of interest are around 50 – 200 MHz due to the huge Doppler shift, caused by expansion, of this very old hydrogen.

The theory of the Cosmic Dawn and the Epoch of Re-ionization attempts to open a window to these early eras of the Universe by observing radio signals that are naturally emitted by hydrogen. A very specific graph with frequency signals at specific energy levels will have to be observed to prove these theories.  This graph (shown below) is the so-called 21-cm experiment. 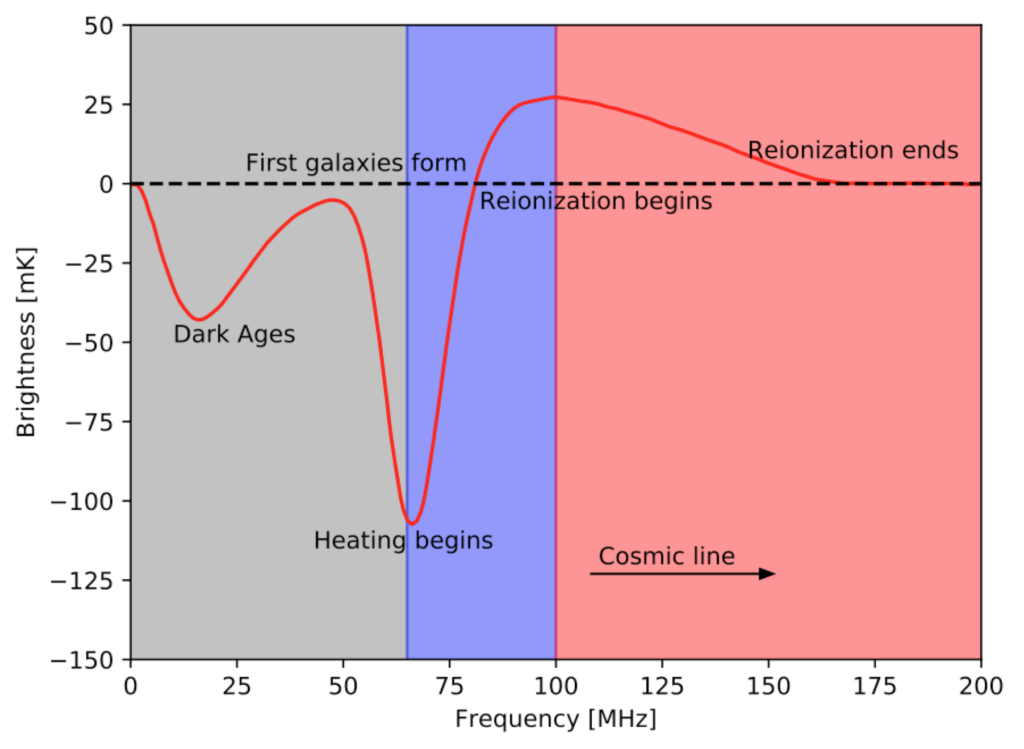 The brightness temperature of this signal is several orders of magnitude lower than those of the galactic and extra-galactic foregrounds, which necessitates a radiometer design that can extract this signal with minimal distortion due to systematic effects in the receiver instrumentation. An earlier experiment called EDGES, led by a team of scientists from the MIT Haystack Observatory, made the first detection of this kind. Currently, the results are somewhat different from what is expected from theory, and therefore confirmations from other independent experiments are needed to clarify this observed difference between theory and measurements.

REACH is the Radio Experiment for the Analysis of Cosmic Hydrogen, which will attempt to make another detection of the cosmic down hydrogen signal. Radiometric measurements will be made possible using state of the art ultra-smooth wideband radio antenna designs to reduce the contamination of the cosmic signal. Prof Dirk de Villiers leads the antenna design group for the experiment, and together with researchers, students, and technicians from Cambridge and Stellenbosch Universities will conduct the antenna design and manufacturing work for this project.

Staff at the Department of Electrical and Electronic Engineering rises to the challenge during COVID-19 pandemic
Comments are closed.