The Electric and Electronic Engineering Department at Stellenbosch University has an ongoing programme of high-altitude balloon (HAB) missions to conduct experiments in near-space conditions. The use of HAB payloads provides many of the same benefits as a low Earth orbit satellite for a fraction of the cost.

Large hydrogen-filled latex balloons of approximately 2 meter in diameter are released at ground level, usually from Saldanha Airfield, with payloads – usually made from Styrofoam –  attached, ascending to an altitude of approximately 30 km, above 99.9% of Earth’s atmosphere. To contextualise – a passenger plane flies at an approximate altitude of 10km. The balloons then burst, and the payload returns to Earth via parachute. The payloads and science data are then recovered.

The most common type of HAB used are weather balloons. Other purposes include using it as a platform for experiments in the upper atmosphere. Depending on the scientific and technical objectives of every mission, the payloads differs. Certain equipment is always present, such as camera, data sensors and tracking devices. 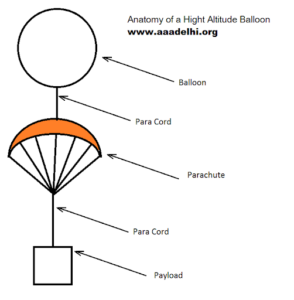 HAB payloads can be used for various purposes such as near-space science, Earth science, weather forecasting, life sciences and educational endeavours. Often HABs are used as research balloons including as weather balloons and for atmospheric and climate research. They are also widely used to collect data and imagery from near space. HABs are further also used for scientific applications such as submillimetre astronomy.

Unmanned HABs are commonly used as research balloons. Other common uses include using HABs as weather balloons, as well as for atmospheric and climate research. They are also widely used to collect data and imagery from near space. High-altitude ballooning is used for scientific applications such as submillimetre astronomy.

HABs have been considered for use in telecommunications and space tourism. For example, private companies such as zero2infinity and World View Enterprises are developing both manned and unmanned HABs for scientific research, commercial purposes, and space tourism. In addition, high-altitude platform stations have been proposed for applications such as communications relays.

Every year, final-year electric and electronic engineering students from Stellenbosch University conduct a HAB experiment.  A weather balloon with a payload attached is launched from Saldanha Airfield.  The video below shows the experiment with the successful recovery of the payload Video playback is 5 times real-time.

Reinforcement Learning in the Minecraft Gaming Environment
Comments are closed.