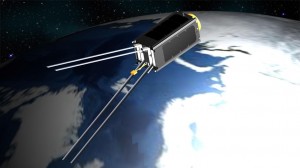 Figure 1: Computer model of the ZA‐AeroSat in its orbit

The Electrical Systems Laboratory (ESL) in the Department of Electrical and Electronic Engineering at Stellenbosch University (SU) and the Surrey Space Centre have been working together on the QB50 project for some time. The ESL develops and builds satellite control system units for the QB50 project. A recent financial injection will enable the ESL to share its knowledge by building 15 control units for participants in the project, which in turn will assist in financing SA’s own satellite, ZAAeroSat.

The QB50 project is an international network of 50 CubeSats (50 nano‐satellites, each measuring about 10cmx10cmx20cm) that will be launched in January 2016 to gather multipoint, in situ measurements of the lower thermosphere, between 200 km and 350 km above the earth. This project is part of the European Space Agency (ESA)’s atmospheric modelling research to improve predictions of what happens to space objects as they enter  the earth’s atmosphere. 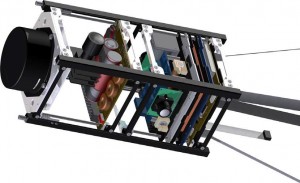 As the ESL enjoys wide recognition internationally in the field of innovative small satellite orientation control systems, the ESL team was requested to deliver 15 control units (QB50 ADCS [Attitude Determination and  Control Subsystem] bundles) to other satellites [Figure 3] on the QB50 project. The ESL accordingly provides assistance where other participants have insufficient experience of satellite control systems, as keeping a satellite  constantly within 10 degrees of the orbital inclination is a major challenge.

The 15 control units (QB50 ADCS bundles), fully developed at the ESL, will be delivered to the Von Karman Institute for Fluid Dynamics (VKI) in Belgium, together with certain software provided with the assistance of the  Surrey Space Centre in England, for further distribution to other selected project participants. The first three control units have already been delivered to the satellite company ISIS in the Netherlands, who in May 2014 will  be launching two pilot QB50 satellites as a test run prior to the QB50 mission. 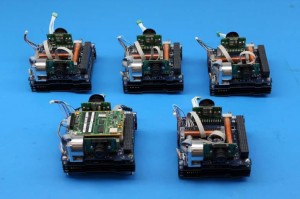 The funding to the ESL makes it possible for the team to supply a satellite for QB50. Weighing only 2 kg, this CubeSat ZA‐AeroSat is Africa’s only satellite in the QB50 project and is currently being manufactured at the ESL. According to Professor Herman Steyn who heads the project, ZA‐AeroSat will also afford them the opportunity to demonstrate aerodynamic stabilisation of a satellite in practice for the very first time. “The antennas at the back of the satellite will be used in the same way as the plumes of a shuttlecock, partially and passively to stabilise the satellite,” explains Prof Steyn. This is made possible through greater atmospheric density at the low orbital heights of the QB50 project.

The ESL has developed the ZA‐AeroSat’s on‐board computer (CubeComputer) and the orientation control system (CubeSense and CubeControl) locally and has tested it for use in space (see Figure 3). These ESL CubeSat components are currently being sold online at the  CubeSatShop (www.cubesatshop.com) and by Innovus’s online satellite component shop at (http://www.innovus.co.za/pages/english/technology/satellite‐component‐sales.php). As an additional experiment, a new ESL star camera sensor (CubeStar) will be flown in order to have it qualify for use in space. 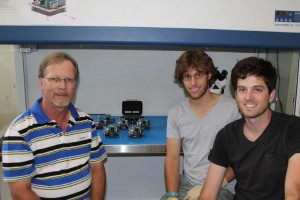 The ESL team is very excited about the QB50 project, as this involves groundbreaking work for South Africa’s space exploration efforts. Historically, only major contenders at best were able to take on such projects.