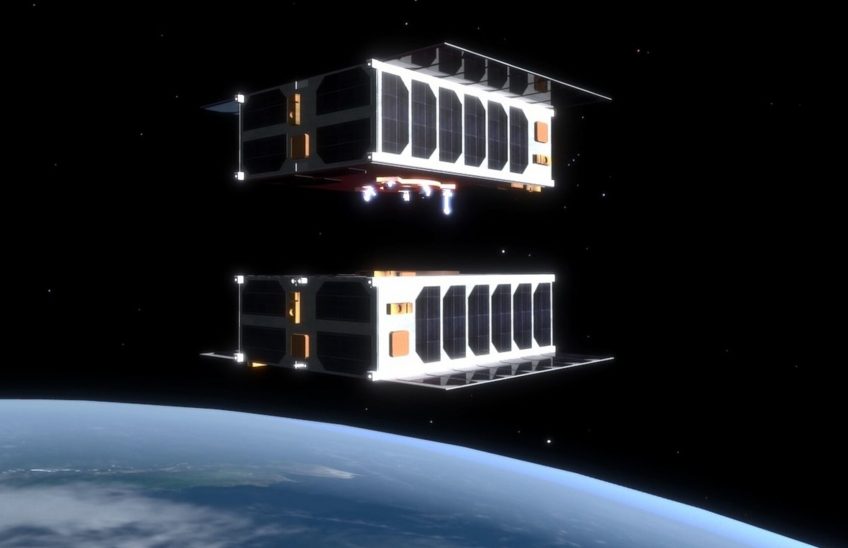 CubeSats are nanosatellites of standardised dimensions based on multiple 10-cm-sided cubes. These satellites play various roles in space including being used for both educational and technology-demonstration purposes. In future, they could also serve as the building blocks of other, larger missions by being docked together in orbit.

Dr Lourens Visagie and Mr Robert Waller of the Department of Electrical and Electronic Engineering, Stellenbosch University developed an experimental docking module for CubeSats as part of the latter’s postgraduate research. The docking module included an optical pose estimation system, which is based on a marker solution developed by Pirat et al. and uses a set of LEDs as markers. It is used to determine the relative attitude and positioning of two satellites. The satellite test facility included an optical pose estimation system that used ArUco markers to determine the attitude and position of the satellite test carts relative to a fixed point within the facility. The research highlighted in this article evaluates the accuracy of the LED marker-based pose estimation method that can be incorporated into a docking subsystem.

The process and testing phase

The docking module was tested on an air-bearing, satellite test facility that simulated the low-friction motion of satellites in orbit, in a single plane. This was achieved with carrier carts that floated on air bearings on a flat glass table. The carrier carts were thus free to rotate about the out-of-plane axis and translate on the two in-plane axes. The carts were propelled around the test facility by a set of cold-gas thrusters.

The LED marker pose estimation was used in a closed-loop control simulation on the satellite test facility. This control simulation has two carts physically undock, move relative to each other and then re-dock. In this planned experiment, the ArUco pose estimates served as the true values against which the LED marker results are compared. In these experiments, the markers are placed at known locations or moved at known rates. An important note is that the ArUco marker results are not considered as an alternative to the LED markers for the CubeSat docking experiment, as when using the ArUco system the camera observer is completely independent of the moving carts and favourable lighting conditions are required. None of these conditions makes it suitable for use in the in-flight docking application

The LED marker system shows promise in that the inline accuracy results are similar if not better than that of the ArUco marker system, at least when closer than 500 mm. This makes it suitable for docking applications as the docking manoeuvre requires higher accuracy at close range and it is expected that the markers will be kept aligned with the imager bore-sight for the docking approach. It can also be concluded that the accuracy of the LED markers is, in general, worse than that of the ArUco markers system at far range and off-centre alignment.

Review of automatic detection and classification techniques for cetacean vocalization