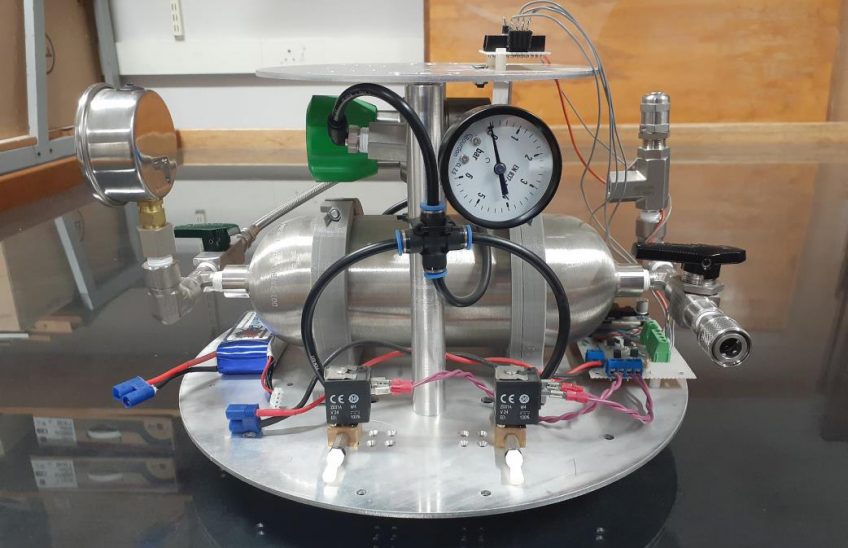 The Electronic Systems Laboratory (ESL) research group at Stellenbosch University focuses on the control of vehicles and robotics, including spacecraft and space systems. In the research discussed in this article, Daniel Jansen, under the supervision of Drs Lourens Visagie and Dr Willem Jordaan, addresses the problem of designing and implementing a planar air-bearing test facility for satellite experiments.

Background to the study

The test facility’s purpose is to provide a testbed for researchers to validate their projects and to perform experiments related to the field of spacecraft and space systems. Having access to an air-bearing test facility yields many benefits for researchers working in space-related fields. For example, it will provide researchers with a testbed which can augment their research in various ways. Currently, the ESL has an archaic air-bearing vehicle and a large glass table. The air-bearing vehicle hovers on top of this table during experiments. An air bearing is a device which creates a pressurised film of gas between itself and the surface on which it hovers, establishing an interface with very low friction. This is used to emulate the low-friction environment that spacecraft face in orbit. Since the glass table is already available, this project will focus on developing a planar air-bearing test facility for satellite experiments. The previous air-bearing vehicle and the glass table can be seen in Figure 1 below.

The scope of the project

The project scope includes the design and implementation of an air-bearing vehicle, a pose estimator which measures the states of the vehicles being operated on the test facility, and a demonstration payload which can perform a control manoeuvre with the vehicle to showcase the test facility’s capabilities. A feedback and communication system (FCS) was furthermore designed and implemented, which is responsible for measuring the positions and velocities of the vehicles on the table. The data is logged and displayed to the user in near-real-time. The FCS can also wirelessly communicate pose information to the payloads carried by the vehicles and can receive relevant info from the payloads to display and log.

Aside from some minor issues, the practical implementation of the test facility performed well and successfully met all requirements. The test facility will provide many advantages for future researchers, allowing them to validate and demonstrate their projects, as well as give them valuable practical experience. This research project has contributed to a functional satellite test facility for use by the ESL research group. The test facility can facilitate various experiments relating to research in space-related fields such as docking and rendezvous experiments, formation flying and the deployment of solar panels, antennas, or sails to name but a few.