When harvesting the Rooibos plant, only the top 30cm of the shrub is cut off. Rooibos plants are harvested annually, and the lifecycle of a plant is between 3 to 5 years whereafter the plant dies and new Rooibos needs to be planted.  It takes about 2 years for a new harvest to be ready. After being harvested, the tea is put through a chopping machine that cuts the tea into 3mm pieces whereafter the tea is spread out on a concrete slab in anticipation of its fermentation process. To properly ferment the tea, the moisture content of the tea is raised, and a heavy roller is used to bruise the tea. The tea is left to ferment overnight during which process the temperature of the fermenting tea rises to about 38 to 40°C. The last step entails spreading the tea out in the sun to dry.

Thereafter the tea is sifted to remove twigs and stems and to improve the quality of the tea. The sifted product is sterilizes using steam which reaches temperatures of approximates 85 to 92°C for about 2,5 minutes or 160°C for 1,5 minutes. After sterilisation, the team is air-dried and packed for bulk storage. 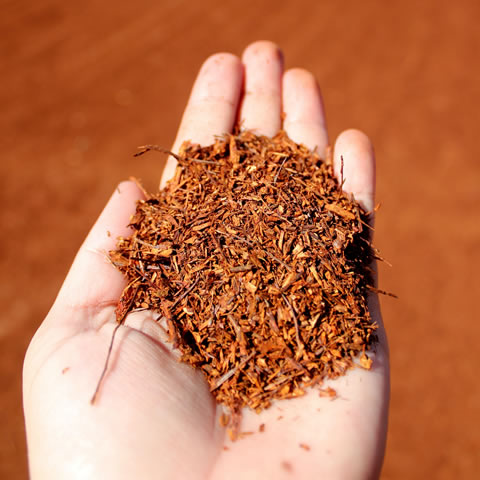 The microbial risk in Rooibos tea

Rooibos tea has a high microbial count that is mostly as a result of how it is processed. The process occurs in an open-air environment where the Rooibos tea is handled and exposed to many sources of contamination. However, South Africa and Europe both have certain standards specifying the maximum microbial count allowed per gram of Rooibos tea. To adhere to these standards, and as mentioned above, the Rooibos tea undergoes steam treatment as steam is an effective form of sterilisation. This, however, affects the tea’s colour and flavour. To address this, microwave irradiation was investigated as an alternative form of sterilisation.

Microwaves are widely used for its heating ability, the most common example being the microwave oven. Studies have shown that microwave sterilisation in some cases proved more effective than conventional heating methods because of the so-called ‘non-thermal effect’ thereof. This effect is discussed in the next section Microwave heating is also known for its steep temperature gradient resulting in rapid heating and shorter processing times. Shorter processing times have also shown to preserve the product’s taste and texture better. Besides, microwave sterilisation has been proven to work effectively on herbs and spices and therefore offers an attractive alternative to steam as it would not add moisture to the tea and may result in a better quality product. To test this hypothesis, a small-scale microwave sterilisation setup had to be built to investigate its viability.

Do microwaves contribute more than simply the heat generated during irradiation?

There is a vast body of literature concerning microwave sterilisation. Attempts to explain the non-thermal effect suggest that since the “temperature gradient of microwave heating is much higher than that of conventional heating, the measurement techniques used are inadequate to accurately measure the rapid temperature increase of the dielectric medium”. This means that an unmeasurable thermal force exists that causes a rapid increase in temperature. The microwave effect is then pinned on the rate of change in the medium’s temperature. The medium’s microwave absorbing ability furthermore increases with temperature and as a result, it “pronounces the material properties of the medium under heated conditions”. This explains the non-thermal effects recorded in the test results.

A microwave sterilisation system was developed from local microwave oven parts and a microwave output power controller was developed to provide reliable control of the microwave power delivered to the applicator. Next, custom hardware was built to achieve this outcome. A magnetron power supply, that can handle the fast switching speeds of the TRIAC controller, had to be designed and the PT100 was implemented to measure the internal temperature of the microwave applicator. A software package was developed to control the microwave sterilisation. The software package combined the controller software with a graphical user interface to easily change system settings as well as monitor all the power and temperature waveforms in real time. The next step was to ensure that the system is specifically suited for Rooibos tea sterilisation. This required the system to be able to cope with a relatively dry load, which affects microwave power control as well as ensuring that the tea does not burn.

The decisive step was to perform the test. This was done by following standard microbial testing procedures to evaluate the total viable count (TVC) and E.Coli/Coliform counts for a batch of Rooibos tea. These counts were compared to the maximum allowable colony-forming unit values set out in the South African Rooibos standard to evaluate its effectiveness.

The final system successfully reduced the TVC to adhere to the South African Rooibos tea standard. However, the E.Coli/Coliform counts were not below the maximum allowable microbial count as set out by the same standard. This suggests that the system should be refined and re-tested to meet the South African Rooibos standard. This goal provides a basis into the study of microwave sterilisation for dry media.